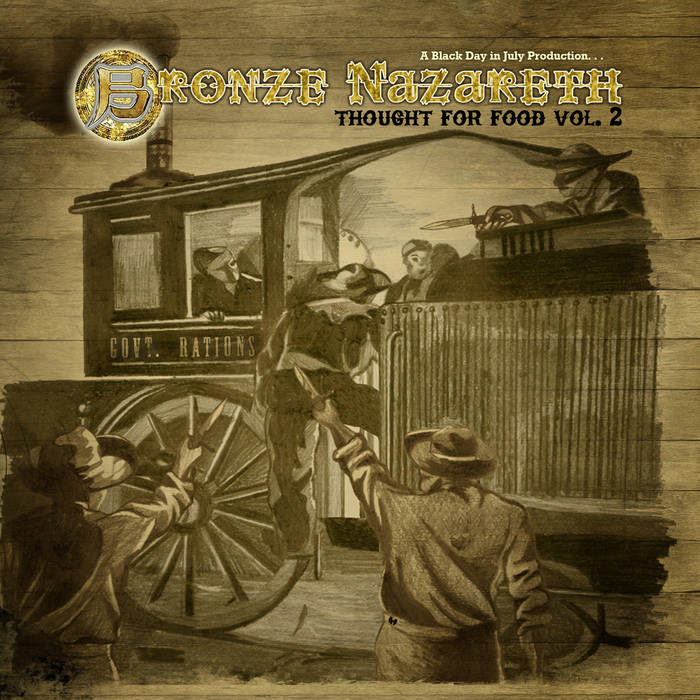 RisFl07 Cant give a favourite track. The whole mixtape is like the first testament for me..

Over the years, countless Wu-Tang affiliated producers, emcees and collectives have joined the Shaolin masters, however very few have achieved both the critical and commercial success of producer/emcee Bronze Nazareth. Now, with the "Thought For Food Volume 2", Bronze further solidifies his widespread reputation as the frontrunning successor to the "new-Wu." Serving as the creative bedrock for multiple solo and group releases (including his group The Wisemen), Bronze is primarily renowned for his contributions to legendary albums from the RZA, GZA/Genius, Raekwon, Killah Priest, Hell Razah, Ras Kass, the infamous Immortal Technique & many more.
With features from GZA, Inspectah Deck, Masta Killa, Killah Priest, Hell Razah, Timbo King, Solomon Childs, Planet Asia, The Wisemen and many more, "Thought For Food Vol. 2" returns the listener to the essence of the hip hop experience: the rough and rugged yet soulfully poignant aesthetic that continues to serve as the hallmark of the Wu-Tang sound/legacy.
With the inclusion of Bronze's beats on GZA's "Pro Tools" LP and Immortal Technique's acclaimed "The 3rd World," as well as Raekwon's Wu Tang vs. Shaolin, Bronze's cache and profile have been growing exponentially. "Thought For Food Vols 2" provides an ample taste of what is and what's to come from the underground producer/emcee extraordinaire.

Bronze Nazareth is a Hip-Hop producer and MC associated with the Wu-Tang Clan. He is regarded as the new generation torchbearer of the Wu-Tang sound. He has a solo career as an emcee and is also the head of his Detroit based group the Wisemen.

Bandcamp Daily  your guide to the world of Bandcamp

New sounds from Mavi, Ivy Sole & Moderator, plus AJ, the One joins the show, for her latest release